This book did not fit any of my challenge criteria.

It’s official. Angela Clarke is in love – with the most fabulous city in the world.

Fleeing her cheating boyfriend and clutching little more than a crumpled bridesmaid dress, a pair of Louboutins and her passport, Angela jumps on a plane, destination – NYC.

Holed up in a cute hotel room, Angela gets a New York makeover from her NBF Jenny and a whirlwind tour of the city that never sleeps. Before she knows it, Angela is dating two sexy guys. And, best of all, she gets to write about it in her new blog (Carrie Bradshaw eat your heart out). But it’s one thing telling readers about your romantic dilemmas, it’s another figuring them out for yourself …

Angela has fallen head over heels for the Big Apple, but does she heart New York more than home? 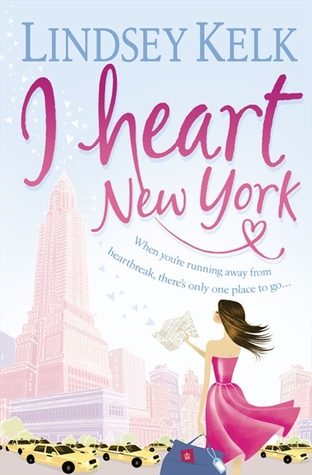 This is a fantastic, and super quick, read. I had it sped through in a day, and it left me wanting more to the point where I ordered the rest of the series to my Kindle immediately.

I really admire Angela’s ballsy attitude. I think we’ve all had a similar “oh god where is my life going now” moment when something huge and terrible happens, and I can definitely understand her motives for moving to New York, as well as her “what have I done” existential crisis when she arrives.

I absolutely fell head over heels for Jenny Lopez when we first met her. I think having a Jenny on hand when I moved country (twice) would have made the transition a lot easier, and she’s definitely a friend to keep around. I loved Jenny’s little makeshift “break up care package” for Angela, and it was the moment I realised Jenny is a good girl to have in your corner.

Naturally, the book is filled with images, sounds and smells of New York, and it will ramp your wanderlust up to 90. By the time I finished this book, I was adamant I wanted to take a holiday to the Big Apple. Money be damned.

There’s a little slut shaming evident in this novel, mainly internalised in Angela. It hasn’t aged well – this book was first published in 2009.

There were some predictable moments in the book – I could predict which of Angela’s dates would end up being her end game. But, at the end of it all I wasn’t too disappointed as I’d warmed to him just as much as Angela had.

Four. Keep your passport at hand when you’re reading this one!

One thought on “Review: I Heart New York by Lindsey Kelk”