It’s so hard to believe that this year marks the 10th anniversary of the announcement of the final Harry Potter book. With this, and the recent passing of Alan Rickman, there’s no better time to take a look over one of the series that defined not just my childhood, but that of millions of people across the world.

These questions are taken from both Charlie at Fandoms on the Run and Katie over at Into the Bookcase.

Harry Potter and the Order of the Phoenix. It was the first real “grown up” Harry book, and the first of the door stoppers. I felt so grown up finishing that book off, let me tell you.

Harry Potter and the Half Blood Prince. Apart from finding out Snape used to make notes in his school book, I felt nothing really happened. And, to add insult to injury, Harry and Ginny broke up. That left me inconsolable for weeks.

Harry Potter and the Deathly Hallows part 2. It finishes off the series spectacularly, and it’s good for a little cry when *spoiler* almost the entire cast dies.

The Chamber of Secrets. I was never really enamoured by that one, and let’s not mention Lockheart. 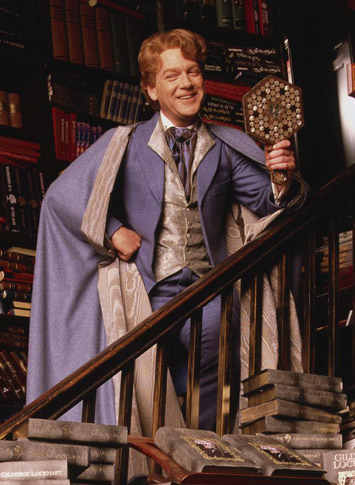 5) Favourite quote?
“Do you remember me telling you we were practised non-verbal spells?”
“Yes.”
“Yes sir.”
“No need to call me sir, professor.”

Ginny. But book Ginny. Movie Ginny is a dope.

Please see above. (Honourary mention to Molly Weasley, who you do not cross in a dark alley.)

Neville. Despite being a bit unlucky at the best of times, Neville really was the bravest person of all (who else would have killed Nagini, and worn an amazing cardigan while doing it?)

McGonagall. She is the best teacher in the series and is so awesome in the last book when there is the big battle. Plus, her Patronus and Animagus is a cat. Need I say more?

Umbridge. You can say that Voldemort was a horrible villain, but Umbridge was much more realistic – the teacher you really hated.

Would you rather A) wash Snape’s hair or B) spend a day listening to Lockhart rant about himself?

Wash Snape’s hair. I could probably teach him what shampoo to use with greasy hair. Listening to Lockhart all day would be enough to drive you insane.

Would you rather duel A) an elated Bellatrix or B) and angry Molly?

I’m sorry, did you see what happened last time someone crossed an angry Molly?

Would you rather travel to Hogwarts via A) Hogwarts Express or B) Flying Car?

Hogwarts Express. You get to have the craic with the other students, and eat everything off the trolley. Win all round.

Would you rather A) Kiss Voldemort or B) give Umbridge a bubble bath?

Kiss Voldemort. I’d rather that than be in a room with Umbridge.

Would you rather A) ride a Hippogriff or B) ride a Firebolt?

A Firebolt. I’d love to play Quidditch, and this would be a great way to get some practice in.

Is there a character you felt differently about in the movies?

Ginny. In the books she was a really awesome and fierce character but in the film she felt very fake and two dimensional.

Is there a movie you preferred to the book?

No there isn’t. I always choose the book over the film, even in the non Harry Potter world.

Given that I was never a big fan of the earlier films, I have to say Michael Gambon this time. He’s a fantastic actor.

Your top thing (person or event) that wasn’t in the movie that you wanted there the most?

The part in Deathly Hallows where Dudley tells Harry  he isn’t a waste of space, just as the Dursleys leave their home. It’s such a wonderful moment between the two, and I can’t fathom why it was left out.

If you could remake any of the Harry Potter movies which would it be?

Probably the Half Blood Prince, and make it a little closer to the book.

Which house was your first gut feeling you’d be a part of?

Ravenclaw. I was always the clever, knowledge-seeking one.

Which house were you actually sorted into on Pottermore?

Slytherin. We don’t talk about that though. Then, when Pottermore came back I took it again and was put in Ravenclaw, and all was right with the world.

Which class would be your favourite?

Transfiguration, or History of Magic.

Which spell do you think would be most useful to learn?

Which character do you think you’d instantly become friends with?

Luna. She and I are a bit eccentric, so I think we’d get on really well.

If you could own one of the three Hallows, which would it be?

The Invisibility Cloak. It would be really useful in certain circumstances.

Is there any aspect of the books you’d want to change?

I would seriously revise some of the names Harry gave his kids. I wouldn’t have named Albus Severus as such.

I can’t pick a favourite, but I can tell you on thing – it wouldn’t be Wormtail. I think it might be Padfoot, who really stepped up to look after Harry after James and Lily died.

If you could bring one character back to life, which would it be?

Fred. I can’t be ok with the twins separated. When I first read his death scene I threw the book across the room SO HARD.

Hallows.. Why be immortal when you can be the Master of Death? Also, if the Horcrux is destroyed I’m screwed.

If you could hook up with any character, who would it be?

Neville. We could live happily together and have a vast collection of cardigans.

What would your Patronus be?

A cat. Cuddly, you get to sleep all day, but still with a killer edge. Perfect. No one would ever suspect a thing.

If you were on the Quidditch team, which position would you play?

I’d be a Chaser. I’m not violent enough to be a Beater, I couldn’t be a Keeper if my life depended on it. My eyesight is far too bad for me to be a Seeker, too.

Were you happy with the ending?

Ok I know there’s a lot of ending bashers out there. But I honestly really liked the ending. I thought it tied everything up really well.

7 thoughts on “The Harry Potter Tag”